Chistopol Watch Factory was founded in 1941 in Chistopol, Russia. The equipment arrived from the evacuated Moscow Second Watch Factory. In the spring of 1942 the factory started producing military equipment. The enterprise worked for the army and it was a secret place. In 1943 Chistopol Watch Factory began manufacturing peaceful production, the first product was “Kirovskie” watch for men. In the postwar years the factory began developing, manufacturing and producing new models of the watches “ZiM”, “Volga”, “Pobeda”, “Vostok”, “Mir”, “Volna”, “Saturn”, “Kosmos”, marine clock etc. Later the factory became the main supplier of the USSR Ministry of Defense, at that time the factory produced “Komandirskie” and “Amphibia” watches with water resistance up to 200 meters. Since 1970s the factory began to produce watches of 24hh caliber with a calendar and automatic winding. Today the plant is bankrupt and the watches are produced by subsidiaries. The watch was brought with the following defect: “something is clanging inside and it doesn’t go” We take the watch out of the body and see

the balls of the automatic winding ball bearing section, two more balls are inside. Take the automatic winding mechanism to pieces, take out the barrel with the spring. Take away the balance and pallet fork. The watch is taken to pieces and ready for cleaning. To be clean is a symbol of health, especially for watches. Old automatic winding section (with a broken bearing) and the new one. The details are clean, and the watch can be assembled. Put the barrel and lubricate the spring. While checking the details I noticed that an idler wheel is bent.

Insert the wheel in the special device and fix it. After the adjustment assemble the wheel system and check the pair of wheels. Cover with the barrel link and fasten. Lubricate and set the pallet fork and check its operation. Set the balance bearings and shockproof device at the same time and fasten with three-leaf springs. And check everything out. After the setting the watch is perfect! And cover with the automatic winding link, and fasten. Turn the watch over and assemble the calendar. The calendar is ready. Set the dial and hands. Set the mechanism in the frame and fasten the new automatic winding section. And the watch is ready. It will make the owner happy again. 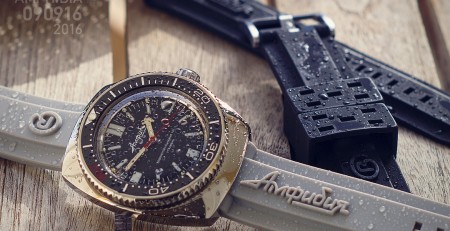 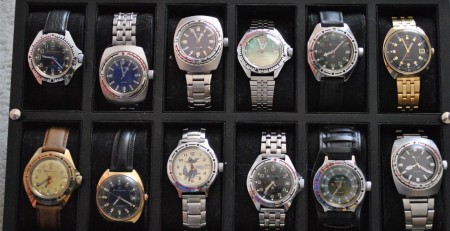 Chistopol Watch Factory “Vostok” is situated in Chistopol, Russia. It is a town-forming enterprise. Today the factory changed its business... read more 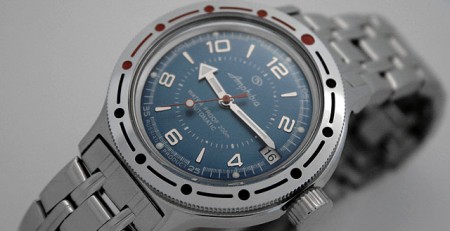 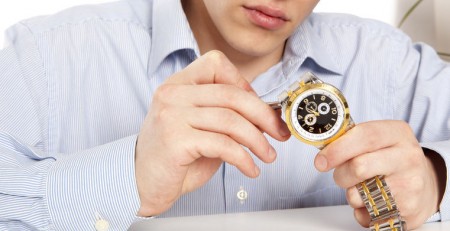 If you want to enjoy your watch, you should follow these simple rules: Like every mechanism mechanical watches require regular... read more